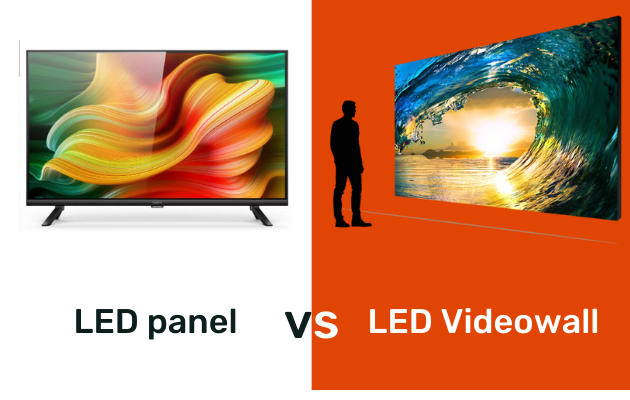 The most crucial decision for firms looking to go into the realm of video walls or even upgrade their existing equipment is whether to choose an LED Panel or an LED video wall. It doesn’t have to be a challenging task to figure out which sort of display is best suited for you.

Recently, there has been some debate on whether LED panels are driving the displays today or are the Active LEDs leading the way. Listed below are the features of the two that will help you make up your mind and settle this debate for once and all.

The viewing angle of a display determines the visibility and clarity factor for the content displayed.

LED Panels, on the other hand, have a much lesser range of comfortable viewing angles and usually need an unhindered view to be visible.

Direct View is a crucial part of an Active LED video wall. LED videowall uses light-emitting diodes that generate the image themselves without requiring any liquid crystal or polarized glass. Hence, only

light-emitting diodes must be affixed to the panel to make the images appear.

Direct View LED displays are known to either use a discrete oval LED system, which is a system containing one single self-contained diode, or Surface Mounted Device LED system, which includes three individual light-emitting diodes bundled together. Either way, it’s the light-emitting diodes responsible for the images you see on screen. LCD video walls don’t come with a Direct View feature.

Active LED walls have no bezels and are made up of small modules on cabinets. Having a bezel-less display system automatically translates to increasing the surface area of the visible and usable LED screen.

As LED videowalls have wide viewing angles, a bezel-less display is a bonus for having wide viewing angles with a broad viewing area. The bezels for LED panels usually rest between the front and back panel, leading to the covering of screen display at the edges and becoming a hindrance.

LED videowalls are usually known to last for about 100,000 hours which is almost twice as compared to LED panels. This is because LED panels do not use fluorescent lights, which are prone to malfunction with a long passage of time.

LED panels run on the technology of fluorescent lamps, which act as a backlight to the display panel. These lamps are known to degrade with time and negatively affect the picture quality.

Moreover, the color output arising out of LED panels also gets involved with time and starts requiring frequent calibrations. Thus, the lifespan of LCD Panels is known to be only close to half of that of Active LED videowall. (Also, Xtreme Media is the only Active LED display manufacturer in the world offering a 7-year warranty)

Active LED displays provide the facility of easy maintenance as they can be subjected to Pixel Level repairing.

LED bulbs employed to create display panels are usually designed to be integrated so that they can be built into multiple electrical circuit boards. This design aspect comes with the advantage that it can be easily replaced if a few bulbs malfunction since the display is made up of cabinets consisting of modules of LED bulbs.

However, in the case of LED panels, any damage to the LED panels will need the entire display to be replaced.

LED videowalls to use LED backlighting distributed across the board, unlike the significant backlight usually deployed on LED panels. Thus, Active LED displays to offer a contrast that is highly superior in quality compared to LED panels. Moreover, LED bulbs can emit the entire RGB spectrum instead of the LED panel backlighting technology, which only shows white and black. Hence, LED videowalls to provide a more profound RGB contrast ratio.

Since LED panels only have a single backlight that only shows white and black range, the contrast aspect compared to LED panels is significantly lower in LCD panels.

An LED videowall provides a much better picture quality than an LED panel screen. The clearer picture quality is due to vast differences in contrast-adjusting rates facilitated by modular light-emitting diodes. Moreover, the quality of clarity regarding whites and blacks is high as it provides RGB contrast in a better and more effective manner.

After considering all these aspects, you should be well prepared to select a screen for your video wall. The type of display very much depends on the kind of setup you have. LED panels are built for small rooms, are cheaper than Active LED. However, they can’t be customized as per your requirements.

On the other hand, an LED videowall allows users to change the size as per the size of the room/hall to meet their specific requirements. The lack of bezels is a super advantage and get to experience a larger-than-life visual experience.

If you want your screen to last as long as possible then make sure you choose Xtreme Media LED videowall which is backed by cloud monitoring technology & auto-ageing technology that ensures the display is long-lasting.

If you’re searching for a video wall, we’d love to talk to you about our options!

To schedule a consultation, please get in touch with us.

An IIT-ian turned into an entrepreneur, Sarjan Satra, R&D Director, is an innovator in true sense. He is the driving force behind the innovation at Xtreme Media and is transforming next-generation ideas into reality.

How can LED displays help transform the BFSI industry?